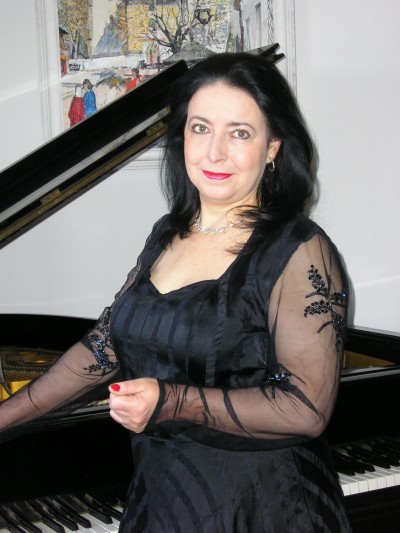 Aldona Budrewicz-Jacobson – pianist, born to a very musical family. She began taking piano lessons at the age of 6 in Sopot.At the age of 12 she received a scholarship from the Chopin Society in Warsaw. She finnished the Music Secondary School in Gdańsk where se learned the piano with Anna Bruzdowicz and afterwards the Music Academy with Jerzy Sulikowski. She is a laurete of the International Competition for Young Pianists in Senigalla in Italy (1974).

In 1977 she went on a concert trip round Italy with the Orchestra of the Baltic Philharmonic conducted by Zygmunt Rycheert. She performed the Piano Concerto by Aram Chaczaturian.

She studied also in Italy with Carlo Zecchi and in Geneve with Louis Hiltbrand. She also took part in several master classes in Sorrento, Ravello, Citta di Castello and Carrara.

Since 1981 she runs the piano class at the Music Conservatory in Geneve and summer master classes in  Santa Maria di Leuca in Italy.

She was one of the founders of the Chopin Society in Geneve, which started its activity in 1997 and organises concerts, master classes and gives scholarships and prizes for young, talented artists.

The critics valued very highly her album with Chopin’s pieces. She has also recorded Piano Concerto by F. Lessel and Dumka and Les Silhouettes by Dvorak for the Swiss label  Re.Cord.Art.

She is very devoted to popularising Polish and Slavonic music in the Western Europe.