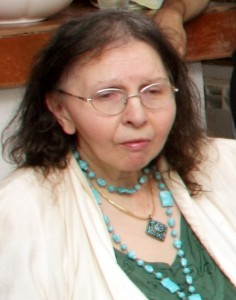 Milica Rogulja: In Homage of Chopin – The premiere

Milica Rogulja (1950) began her music education in the Belgrade Primary Music School Davorin Jenko and then went on to study at the Belgrade Music High School Kornelije Stanković, after which she completed her Bachelor’s and Master’s studies of composition at the Belgrade Music Academy, under the mentorship of Professor and composer Enriko Josif. She continued advancing her skills and talents at the Rome Conservatory Santa Cecilia, with Prof. Claudio Bortoletto. Three years after she completed her studies, she was invited to join the Association of Composers of Serbia. During the ensuing years, she won a number of the Association’s prizes for her new compositions. Furthermore, in 1976, she won both the first and second prizes for her choir compositions at the Radio Belgrade competition, while, in 1983, her graduation composition, a 52-minute-long oratorio Brahman, won the October Prize for Students. Her duet for violin and cello won 1st prize at a chamber music competition in the Italian city of Cortemilia in 2000. That same year, her commissioned symphonic piece Worthy it is was performed during the celebration of 2000 years of Christianity in Rome, in the  Le donne in musica programme.

The following compositions by Milica Rogulja have been performed in Serbia: Morning Songs (words by poet Jovan Dučić), the above mentioned a cappella choirs (words by poets Jovan Dučić and Stevan Raičković, Sonata for violin and piano, Psalms 1 and 2 for the Flute Choir, while her specialisation in Rome was crowned by the performance of her composition Oltre la grammatica for six performers written during her studies there.

Apart from composing, Milica also worked as a piano accompanist in the Primary Music School  Stanislav Binički. The ceremony marking her retirement in 2010 included a mini concert of her pieces. Milica herself played her Sonata Envagelica (1974), while two pieces of what is now her piano triptych (In Homage of Chopin) were played for the first time at the concert – Invisible  Threads of the Nocturne and Circling round the Waltz.

In the meantime, Milica completed her triptych In Homage of Chopin, with her Mazurka of Confessional Playfulness. This piece in the form of three – part structure composed will have a world premiere at Belgrade Chopin Fest in 2014.