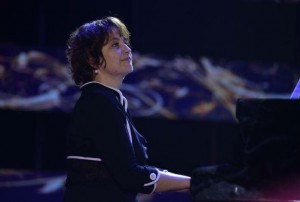 was born in Belgrade where she finished music school in 1987 and left for studies in Odessa`s State Conservatory ( Ukraine ) where she attended Master classes with Anatoli Povzoun, Ludmilla Ginzburg, Tatyana Shevtchenko and Alexander Kardashev.After winning all national prizes in her country she won the second prize in a chamber music competition in Odessa (Ukraine) for the best interpretation of Beethoven`s violin sonatas. She was a temporary soloist with Odessa`s State Philharmonic Orchestra, gave recitals and was an active chamber musician. In 1992 she graduated with a Masters degree, with a gold medal, as a piano soloist, chamber musician and tutor.
Sanja Stefanovic played as soloist and chamber musician all over the Europe, ex-USSR republics and in Persian Golf (Qatar), recorded for diverse Radio Broadcastings since her childhood (Serbia, Poland, Ukraine, Germany) and for diverse TV Broadcastings by performing and giving interviews.
She was musically influenced by great pianists such as Leonid Brumberg, Dmitri Bashkirov, Rudolf Kehrer, Peter Feuchtwanger. She took part in famous Summer Schools such as “Mozarteum Salzburg” (Austria) or “Tibor Varga – Sion” (Switzerland), played at the Feuchtwangen Piano Festival, Schlossspiele Hohenlimburg, International Chambermusic Days (Germany) and took part in some international competitions like Schubert International Piano Competition (Germany), Vladimir Horowitz International Piano Competition (Ukraine) and in chamber music on a TIM International Competition (Germany). In last 10 years, she has developed two programmes: a special method for teaching children in early ages (up 6) and a “International Hohenlimburg Music Competition” in Piano for children and youth between 7 and 20 years old, the venue that is under patronage of City of Hagen, Music School Max-Reger, Sir Charles Hallé Society and Lion´s Club, as well in Hagen. Sanja succed to get together the internationally aclaimed pianists and piano teachers such as Florian Uhlig, Peter Feuchtwanger, Heribert Koch, Michael Zischang. Her idea moved the people to organize the Chamber Music Days in November 2008 in Hohenlimburg ( Germany ), where she was performing, Artistic Director and organizer. These small chamber music festival became an insider tip in the region which led Sanja Stefanovic to start work together with a well known organisation ProRuhrgebiet in 2010. Sanja Stefanovic played at the finissage of “Out of the Office”, a venue that was part of the European Capital of Culture RUHR.2010. The International Chamber Music Days in Hagen, Germany, were held 3 times with the leading European and international artists. In July 2013, Sanja Stefanovic became the Head of the Music of Pro Art & Co., a non-profit organisation from London, U.K. which enables her to develop European Music Projects, where she is actively performing piano music and chamber music. Recently, Sanja Stefanovic started the cooperation with internationally aclaimed Ukrainian composer and professor Julia Gomelskaya and internationaly aclaimed Britisch mezzo-soprano Sophia Grech.